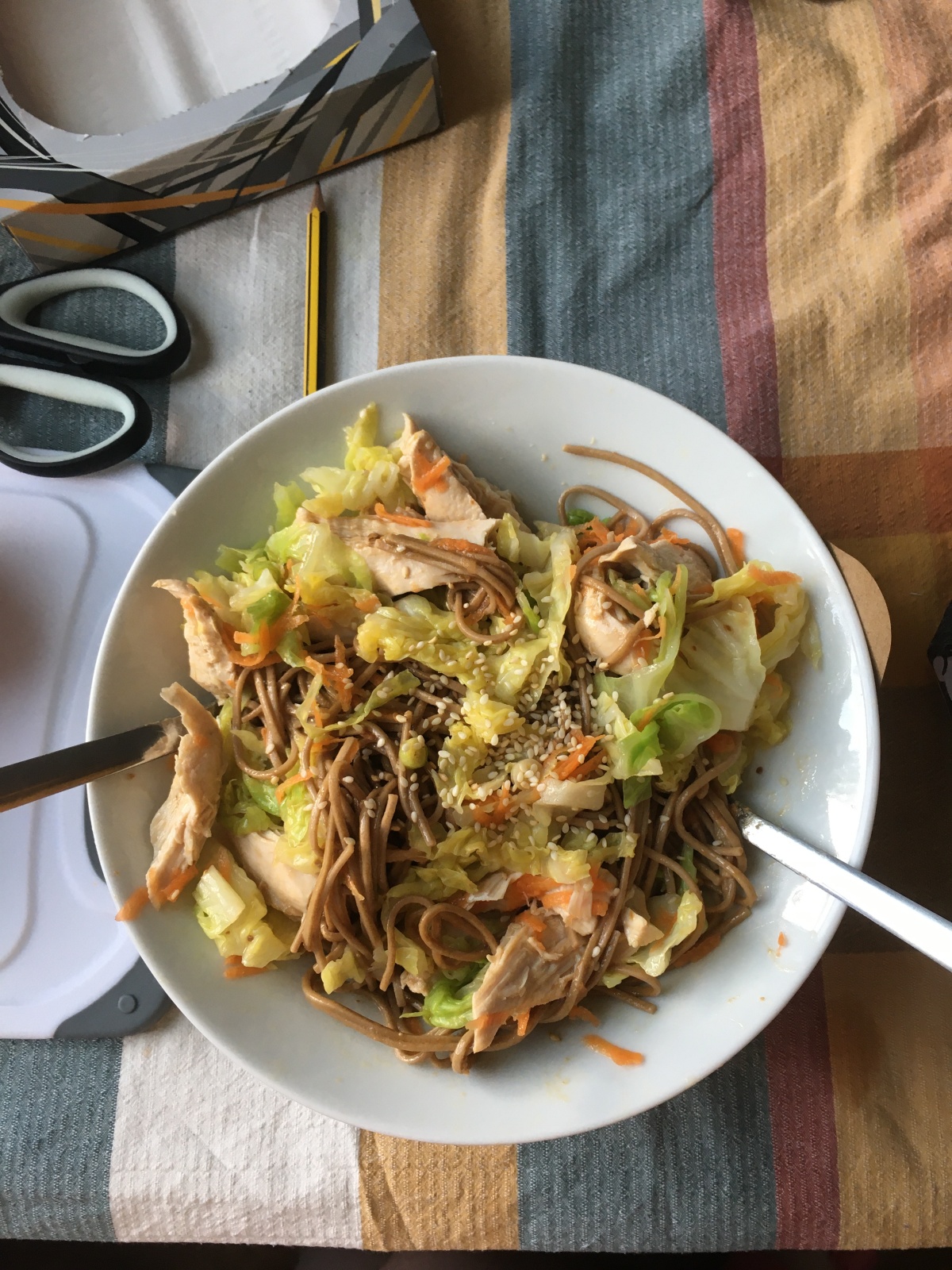 This recipe came out of a desire to cook something quick and tasty, and also use up all of my sad fridge vegetables (TM). We’ve been getting Oddbox, a service that sends surplus or weirdly shaped vegetables for cheap, which is great, but then we have to figure out what to do with everything.

The heat wave finally broke this weekend, which means I finally felt like cooking again for the first time in a long time. I had wanted to make a kind of cold peanut noodle soba edamame chicken bowl thing when it was hot, but it was literally too hot to even think about turning on the stove. We boiled water once for pasta and as soon as it was done we had to fill the pot with cold water to stop it heating up the entire kitchen.

I don’t know about you guys, but I feel like cold soba noodles with a sweetish peanut sauce is both delicious and extremely obvious, by this point. I never tend to worry too much about food trends (“Quiche is so 80’s!”? whatever, Gladys, quiche is delicious.) But you do tend to get bored.

I feel a little weird about putting this recipe out, though, because while I did develop it from an NYTimes recipe that’s basically just “Japanese-inspired” chicken noodle soup, and a Serious Eats recipe that doesn’t mention Japan at all, I basically made it up.

So I don’t want to tell you it’s Japanese, because it’s not. But it uses Japanese flavors – it’s not like miso’s a trend. Or peanut noodles, for that matter. But then it also uses Vietnamese flavors. And American flavors (boneless skinless chicken breast). But I’m not going to say Asian-inspired because that is insane, because Asia is a… continent.

Plus, acting like using miso is new is just… not the case. But it does use miso in a way I haven’t before – I usually just stir it into soup, but this recipe mushes it with butter and then uses that to coat the noodles, which both deepens the soba’s natural buckwheaty flavor in the same way you’d use brown butter in your baked goods, and also is just salty and umami and delicious, with the butter helping the miso to spread and coat evenly.

Is there a limit to the different times and ways I will give you a recipe for Chicken and Pasta? No. But this I found to be deeply refreshing.

The miso butter noodles are salty and nutty and buttery, and the chicken is tender and aromatic, and the vegetables are fresh and crisp and sweet, and then there’s some crunch from the sesame seeds. It’s very good, is what I’m saying.

Also, lots of these recipes will have you sear the chicken and then cook everything separately. The thing I love about this is that it all cooks in one pot, unless you forget about bringing up the butter to room temperature like I did and have to melt it on the stove. Don’t be like me.

It’s also poached boneless skinless chicken breast, which is what Weight Watchers nightmares are made of. But even though the idea of boiled boneless chicken is a culinary nightmare, I genuinely think poached chicken gets a bad rap. Poached anything isn’t sexy right now, but put it in a plastic bag and it becomes sous vide and then it’s Very Sexy. What a bunch of nonsense.

Whatever. In Defense of Poached Chicken: it’s only flavorless if you don’t add any flavors to it. It’s also cooked with no added fats at all, so there. But poaching it in aromatic liquid makes it flavorful and delicate, tender and juicy, and you don’t have to sear anything. And it only takes 10 minutes. Also, it leaves you with a beautifully infused light broth to cook everything else in.

Halfway from this Serious Eats thing, and also kind of from this NYTimes thing.

You can use any leafy green you want to, here, but cabbage is perfect because it’s crunchy and tender and sweet. In fact, just use cabbage. Forget I said anything. I had a big old Savoy cabbage going bad in the fridge, which was good because its delicate leaves wilt quickly when you chop them and steam them. Napa cabbage would also cook quickly. You can use regular cabbage too, but make sure you cook it for a little longer because it has a bit more Heft than the other varieties.

Also, put whatever raw vegetables you want to on top at the end. Carrots and scallions are good and sweet. I’m sure peppers would be good, but I hate them so much. Edamame! Snap peas. Bean sprouts. Go nuts.

For the miso butter:

1 tbsp miso (any color. For a milder flavor, use white. I used brown rice miso because it’s what I had and I’m very hardcore.)

For the soba noodles:

A packet of soba noodles

1 tbsp chopped fresh ginger (you don’t have to chop this small, just peel a thumb-size piece and smash it if you have a root. I had a bunch of pre-chopped stuff in a jar, so that’s what I did.)

1 star anise pod (I know this is shmancy, but it’s really good. If you don’t have one, try fennel seeds, or a cinnamon stick, or just a bunch of black peppercorns. Something aromatic and spicy.)

1 carrot, grated on the big side of your box grater

Could you do hot sauce? Lime juice? Sure, but I don’t think it needs it.

Just over here sinking into a vat of homemade tiramisu like it’s an ice bath. No stove, no oven, no problems. 🧊 Go get some at cook-instead.com
Betty Draper, Wile E Coyote, and Joe Lycett are all showing up for Drink Instead Summer. This week on the blog, it’s Lemon-Lime Cordial for Gimlets! Pour yourself a glass at cook-instead.com 🍋 🍸
Hopefully there’s air conditioning, but even if there’s not, there’s iced coffee. An essential recipe, now up at cook-instead.com
The mellowest, thirst-quenchingest, goes-with-everythingest, most delicious summer beveràge you could choose to make: Dave’s Sweet Tea 🍋🍯☀️this week at cook-instead.com
This week we’re strapping on our leg-skis and taking a trip to the dream-kitchen in my mind-palace. That’s right, folks, it’s time for Essential Mac and Cheese, up now at cook-instead.com. 🧀 🫕 ⚡️
CAKE INSTEAD RETURNS 🍰 with the best vanilla frosting of all time AND a luscious raspberry buttercream. Some people say this is what dreams are made of, and I am one of those people. Raspberry Ripple Cake, this week at cook-instead.com.